Joined Nov 24, 2018
·
304 Posts
Hi Everyone, I had a project drop in my lap and I'm considering going in whole hog. A friend has an '05 RoadStar that developed a problem with 2nd gear. With about 80K miles on it, his wife said this might be a good time to get the SVTC you've been looking at and there was little hesitation. The RoadStar has been sitting for about 8 months now. He offered the J&M CB to me for my V-Star so the bike was brought to my house on his trailer. I'm starting to pull the radio off but as I look at this bike with a bigger engine (1700 cc with great torque!!!) that I've been lusting over, I'm kicking around the idea of buying the bike in as is condition and repairing the tranny. Therefore, a request to ask if there are any e versions of a service manual available? If not, I see many for not too bad prices on EBay and Amazon. I know a free one was easily available for my V-Star but it's not popping up for this RoadStar.

Anyone work on an '05 RoadStar transmission out there? I can't give exact details for the problem with it yet as I'm still waiting for the key to pull the seat off (forgotten when it came over) and I didn't ask a lot of questions about the problems with the transmission since I was after the radio but now my mind is going this direction and I'll be seeing my friend this weekend. So far, I recall hearing 2nd gear went out but it ran well otherwise.

Yes, a pic - messy but it will clean up. Blocks were to set up the gas can up as I drained the fuel first to pull the tank off soon. 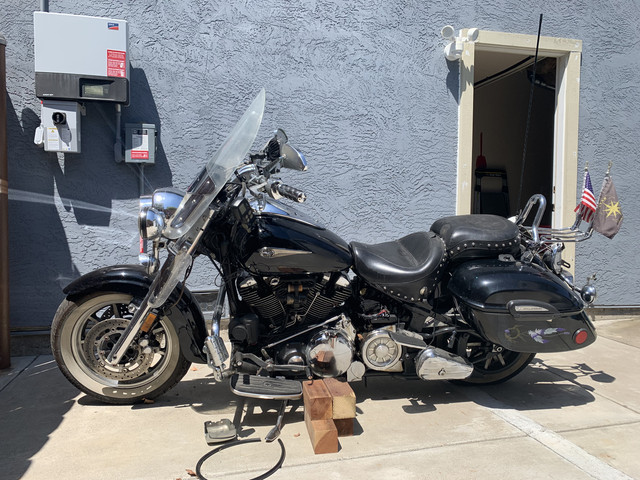 Yamaha Pat said:
Once you see if it runs I think it would be a no brainer.
Click to expand...

Says the man with two bikes and no car! Yes, I'm kinda jealous but that doesn't work too well with a wife that thinks camping is staying at a Hilton. :smile:

I got the key tonight so the seat and tank is off. I'll start moving the radio in earnest on Thursday. I did ask about the problem with 2nd gear and he said it would not catch and not go into 2nd but sometimes it would. Often he'd go from 1st to 3rd.

its getting close to engine rebuild point

if you have plenty of freetime on your hands and you can get the bike for a few hundred dollars, then you could make a project out of it, and fix the transmission to make it ride-able again, or completely rebuild the bike (suspension, brakes, steering bearings...). The problem is for way less work you could take the bike apart and part it out, and have enough money to buy a decent running Road Star. Unfortunately a lot of these bikes are worth more dead than it would cost to repair them.

this is a good time to point out: never ride a motorcycle that is not 100% functional - you never know when you will need to avoid a collision to save your life, and a wonky transmission or any other mechanical issues is not what you want when your life is on the line.
► Show Full Signature
2005 Vstar 650 fully stock bike with quick release windshield, fork deflectors, and trunk in place of passenger seat
2000 Royal Star Boulevard "Ursa" (the She-Bear) fully stock, windshield stays in the garage with saddle bags unless needed

Joined Oct 1, 2017
·
55 Posts
Well if it were well maintained, 80K on the odometer wouldn't be a big deal as those have been known to run well past that mileage. However, the average cycle buyer would probably pass on one with high miles. So at best in working condition that bike might be worth $1-2K around here. Could be more or less depending on your market.

If you want a project and have the skills it would be worth picking up on the cheap to fix and have a nice ride. But if you start paying an independent shop I'm sure you'd probably exceed the value of the bike just in labor costs.

You could likely find a used engine/trans cheaper to drop in.

Unfortunately as @KCW says, that bike is worth more in parts than it is whole.

I'll send you a PM regarding a service manual.

Joined Nov 24, 2018
·
304 Posts
KCW and Brad_G, Thanks for the feedback. I know I have good mechanical skills being an x-ray repair guy but I've never rebuilt an engine before and feeling a little intimidated by that thought once I took the tank off this bike. I've done tune-ups, brakes, radiator changes and oil changes but not as in-depth as a rebuild. But, for a few hundred bucks, it might be an enjoyable project where I could learn a bunch. And, at that price, if it never runs again, so be it. I'd have to negotiate half the garage for a period of time so more to think on. And, like I said, thanks for the input.

Joined Oct 1, 2017
·
55 Posts
Yes you would definitely learn a lot by doing it. If I had the space to have it torn down for an extended period of time I'd give it a go as well. If nothing else for the experience. You can always bail and sell off the parts for more than you've got in it.

I've done my fair share of head gaskets and other internal type work on cars so a bike wouldn't be too big a stretch. Today's cell phones with a camera are a big help. Easy to take pics of things to show how they should look or go back together. Also for sharing when asking questions, and I'd ask a lot going through this. Hahaha

One tip, ziploc bags are great for organizing bolts and small pieces. You can use a sharpie to write on them describing what the parts are and where they go. When you're days/weeks/months into a project the memory can be fuzzy on where stuff goes.
K

Joined Sep 21, 2016
·
5,572 Posts
If you rebuild the engine completely its the little things you need to be careful of, like measuring all the bearings and journals for wear and roundness, making sure your rings are the right size, there are different width pistons you can get to machine the cylinders smooth again

All that stuff adds up - you will still get the job done for less than paying someone else $100 / hr labor, and when you are done you will have a whole tool box full of new specialized tools.

If you never rebuild another engine, all those tools will sit in your garage for decades.

I had to rebuilt the engine in my first aircooled VW in 1977. I owned 12 over the years, only rebuilt one more completely, but replaced heads and pistons and could take the engine out and put it back in the pitch dark if I had to.
► Show Full Signature
2005 Vstar 650 fully stock bike with quick release windshield, fork deflectors, and trunk in place of passenger seat
2000 Royal Star Boulevard "Ursa" (the She-Bear) fully stock, windshield stays in the garage with saddle bags unless needed
J

Joined Jan 21, 2014
·
5,089 Posts
Boots, I say if you have the room in your garage to dedicate for a while it's a great project. My suggestion if you split the case for tranny work, do a compression test first. If good compression do what I call a soft rebuild, main bearings, rod bearings, rings, lap valves, hone cylinders, all seals and gaskets related. You would have an estimated $500 in parts. Then ride it for another 100k. Basic mechanical knowledge is really all you need. There's enough information out there now days to walk you thru it. Here's pictures of my last two builds. I've done at least 20 car engines and 10 motorcycle engines. As KCW mentioned, bag and tag every part, take lots of pictures on disassemble. In old days I drew pictures of where everything went, phone cameras made it easier.

Thanks for the encouragement. I have to negotiate a fair price first and go from there. If it's a small investment, I would be more at ease to know if I really blow it, it's not a big deal.

when I was kid my best friend told me when he was little his father had taken the engine out of his car, and had the head off, a straight six

When he was outside playing alone he went and got his bucket and shovel and filled in all the holes in daddy's engine with sand from the sandbox, so it wouldnt have holes in it anymore - the cylinders, the water passages, and he smoothed it off real nice.

Joined Nov 24, 2018
·
304 Posts
Funny but I’m sure the dad was not amused. In the mid 80’s, I was once changing the oil in my little Honda Civic (yellow of course) and after draining the oil, I opened a can and went into the garage to find the funnel. When I came out, my 3 year old son was pouring the oil into the open engine compartment, just able to reach over the fender. He wanted to help dad! I couldn’t be mad....