Joined May 13, 2017
·
459 Posts
Just a conversation starter. What bike do you think of if someone asked what bike you loved the most?

My favorite is my first. I smile every time a see one. Great memories for a kid.

Honda Trail 70. It was a great bike too. I beat on it and it just ran and ran. 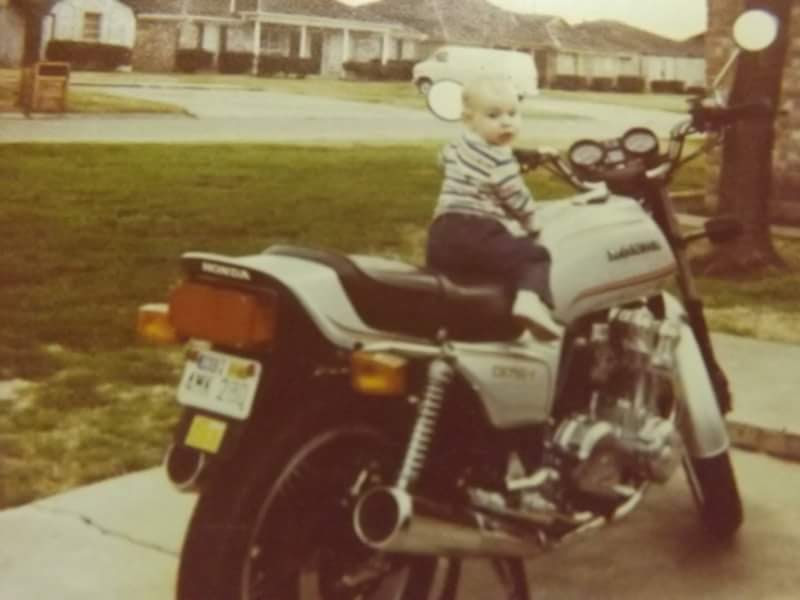 and I always rode it safely with a young lady.

Joined Nov 17, 2016
·
2,353 Posts
When I was 12 Dad got me a brand new '77 Honda XR75. Four of my friends also had one, plus one who decided he'd like to ride after dark and got an XL75 (it was street legal with a headlight, turn signals and even a licence plate holder). For 3 years the five of us rode the wheels off those bikes, trying our best to imitate the motocross riders we watched at the local track and tearing through the trails behind our subdivision. I remember being stopped by the the RCMP once for riding on the streets. My buddy was ahead of me as we rode past another street. The cop pulled out between us and cut me off but he got away. I think I was grounded for a few weeks after that little incident. Never did tell them his name, but I'm pretty sure they knew who he was. Ah, good times.
► Show Full Signature
Paul
2007 Vulcan Nomad
V&H exhaust

Rode my daddies... Suicide shift Cushman! I remember it was heavy and slow.

My second bike was a yellow cb200. My buddies had a xl175 and xl250 so I was a little jealous as we rode off road a lot, the little cb tried but struggled in the sand. I put a lot of miles on it until the cam chain broke.

Bucfan11 said:
Rode my daddies... Suicide shift Cushman! I remember it was heavy and slow.

Sent from my VS996 using Tapatalk
Click to expand...

That was my guess. When i was a kid there was a neighbor on the corner that had one.
► Show Full Signature
I ain't lost until the tank is empty!

Joined 8 months ago
·
1,607 Posts
All of my old rides have a special place in my thoughts. I would have to say right now my 1100 Classic is the one. It is old school kinda like myself
► Show Full Signature
I ain't lost until the tank is empty!

Jspree said:
Now as for my favorite bike I got a 1960 Pan Head FLH in 5 boxes in 1978 and built it. I really wish I had that bike now to ride around town.
This is a picture the same model.
Click to expand...

That must be the australian model.
► Show Full Signature
Time flies like an arrow.
Fruit flies like a banana.

In 1974 I got orders to Eglin AFB in Florida. I bought a honda CB500 off a bud who was getting out soon (DOSing as we used to say).

Shortly after that I picked up a 2 or 3 week school at Robbins AFB in Georgia. I packed my sack and took off in a drizzling rain that got heavier as I went east. No windscreen, no rain gear. Fatigues, fatigue jacket, boots, helmet. I finally got past it somewhere in southwest Georgia. I think Albany is where I stopped at a laundromat to shuck my duds and dry my stuff, repack, and hit the road again.

It was a geat trip. School was interesting. Bumped into some old tech school buddies from a few years earlier. Beer was drunk. Took a day trip to Lake Tobesoffkee. Beautiful lake. Was introduced to quaaludes that day. Night trip to Uncle Sam's in Macon to hear some damn fine music and watch as a couple dozen college kids streaked the stage. Yeah, streaking was a thing there for a year or two. Uncle Sam's was kinda the Armadillo World HQ of that part of the world.

Made some good friends. Had a barley pop or two with classmates when school was done and we were heading home so I got a very late start. Fell asleep on the bike and survived totally unscathed. Had no trouble remaining awake for the rest of the trip home and also did not use the throttle lock again. Back in those days, 24 hour convenience/gas stores were few and far between out in rural Georgia and Alabama. I was saved by a middle of nowhere late night gas station in some tiny town SE of Dothan, AL. I think I got home around 3am.

Hell of a trip. A good time was had by all.
► Show Full Signature
Time flies like an arrow.
Fruit flies like a banana.

Joined Sep 30, 2016
·
26 Posts
Since the question was not about what bikes were/are liked, but rather is about which was MOST liked I would have to say my most liked bike is my current ride a Honda VTX 1300R:

Point being that many riders had/have a favorite category bike that may have shined in one category over some other loved category.
► Show Full Signature

Joined May 28, 2018
·
1,613 Posts
The reason my XS Eleven is a favorite memory it is the first bike I bought from Ted Evans Yamaha. The 1st of seven I bought from there. Mom bought my brothers RD250 about 10 or 12 years before from Ted. Alas it is also one of my worst memories

► Show Full Signature
Riding is not just what I do but who I am.

Joined 5 months ago
·
163 Posts
Excellant, it was a Cushman Eagle, foot clutch and 2 speed suicide shift, it is what made always love cruiser style bikes.

The wife and I just rode to Biloxi for yesterday and last night then rode back today. The strat is a great bike for interstate travel.The tunnel in Mobile was a ball on that bike.It is just so dang hot right now.

Joined 5 months ago
·
163 Posts
Did anyone else own a Yamaha Cat trials bike. That was a very fun bike , the balance was awesome. The way it was built allowed you to do things that at sometimes it felt like magic. Riding trials in the 70's was different then today, your brain could see the section, figure out the problem and then be amazed sometimes this bike really can do what your brain figured out.

Joined 10 months ago
·
85 Posts
Rolling off the showroom floor knowing that it was PAID FOR! The wife won some 8K at Bingo the night before so the next day it was in my driveway, free and clear!
► Show Full Signature
750 Chris Here in this forum
750 Chris In VRA forum
750 Guy In VROC forum
Chris and Shim In vn750.com forum
Long retired USAF AMMO troop (74 to 95)
Fully retired now :grin:
2005 Yamaha Virago 250
2006 Kawasaki Vulcan 750