Joined Mar 27, 2019
·
110 Posts
I'm sure this is not something that most are concerned with but when I'm driving I like to have some background noise or something to get lost in instead of my thoughts. Would any of you have a recommendation?
I would prefer to not have to replace or charge my helmet, but my current headset is not adaptable in that matter I don't think.

Joined Mar 21, 2018
·
137 Posts
Double check in your area as to the legality of riding with headphones in. I have tried a few different options, without spending S**a prices. One option was the inductive headphones...they don't actually go in to your ears, so legal in my area. they work well in the helmet and give some noise, plus allow navigation to go through. Downside was that I had the wired ones and had to be careful getting off the bike, or it would snatch my head around haha. Next attempt was the BT-S2. I liked them well enough for the price. They have a good battery life to them...could make it most of the week on about half an hour round trip per day...and they lasted throughout a good weekend ride. Downside is one of the 2 charging cables went out, then the headsets started cutting out in one or either ear. They were a little quiet on sound level, even with everything turned up. They did allow for FM radio, intercom, and music from phone that allowed navigation to cut through, as well as phone calls. A surprise was that one phone could be shared between two headsets when paired properly. Latest attempt is the Freedcon TCOM-SC. Once again, you will have speakers in your helmet. So far I am enjoying them though. The sound quality and level is higher/better than the BT-S2, which is a plus when wearing earplugs (which surprisingly aren't illegal) and the controls (jog wheel instead of buttons) are a little easier to do. Has all the same features, not sure about 1 phone sharing music yet though. The intercom is definitely a lot better and can hit a button to talk while listening to music vice only one or the other.
Another option you see, is just the bluetooth speakers on the handlebars.

TLDR; Lots of options out there. Decide if you want headphones or speakers, then can narrow it down for your budget.

Joined Jan 21, 2014
·
7,516 Posts
I've used Uclear for 5 years. I really like it. Sound is decent, good battery life, waterproof, cost effective, cross brand linkable, simple to use and has linked to multiple phones without any issues. I've used them over 9 hours before low battery tone started beeping. Wife has one on her helmet and intercom works great. I used the Uclear in HJC 3/4 helmet, HJC modular, HJC full face, Speed and Strength full face and Hawk full face. Fits well on all. I swap helmets often while washing helmet liner. I have bought additional mounts($10.00 each) for all my helmets. I use it on my daily commute and take phone calls often. Call quality is good up to about 60 MPH. Above that it can be hard to hear. Streaming music is good at any speed. Recently was coming back from San Antonio and went 84 miles in 59 minutes, so I averaged 84 MPH and music was good the whole time. If I had to replace it I would buy again. 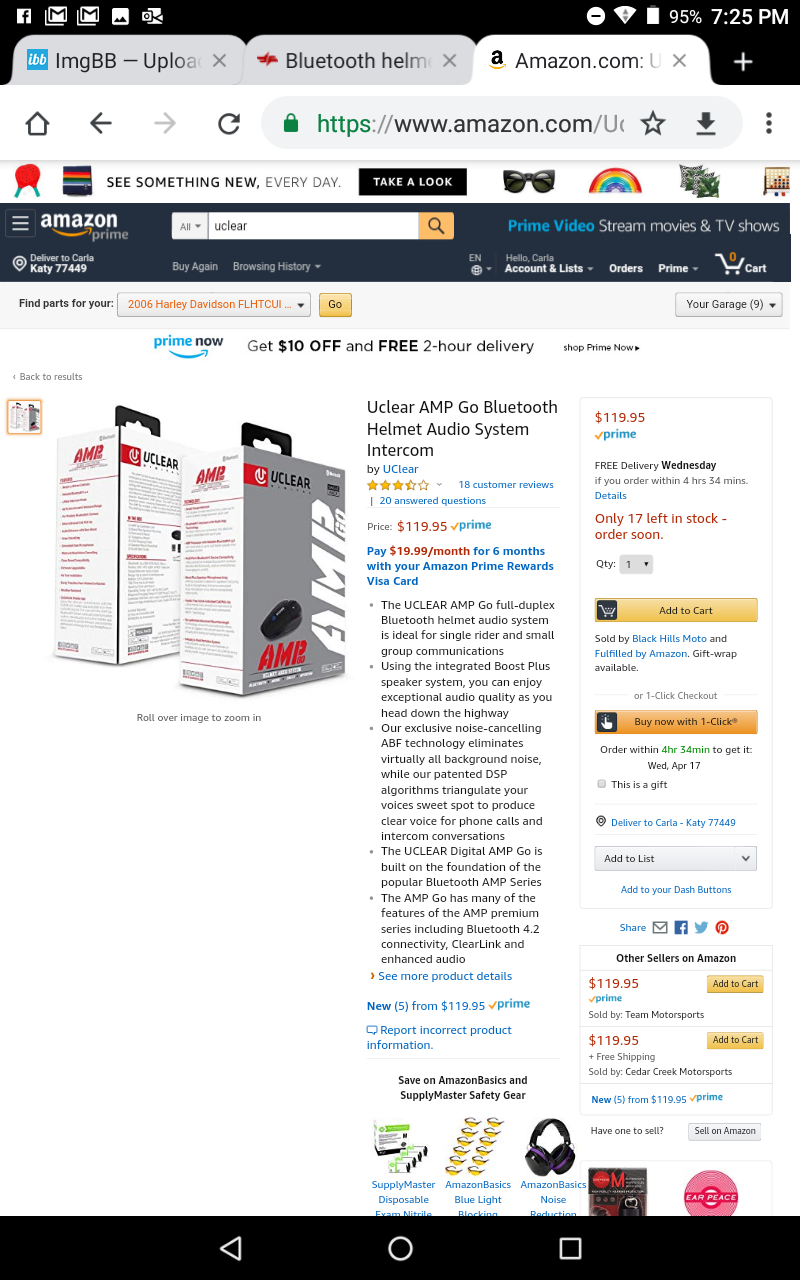 Joined Mar 27, 2019
·
110 Posts
As for the legally, as far as I know the laws in NC allow for one earbud in, but I have stopped caring for earbuds. I'll check about headphones, or ask if I get pulled.
I have seen the inserts for half helmets that covers the ears, and I have no interest in full helmets, I don't like removing my glasses to put it on or take it off.

I'm with you. A mind is a terrible thing.

comes in wired or wireless. i've used these for a decade. they fit well, sound amazing, and block out road/wind noise. i use the wired set and stream from spotify or pandora from my phone.

Joined Mar 27, 2019
·
110 Posts
I have used earbuds for years and my thanked me for switching to headphones and more so when I don't use either but I like to keep my entertainment private, especially what I have been listening to recently, nothing embarrassing just out character for the big biker type.
So, ya my preference is more headphones then earbuds.
1 - 7 of 7 Posts
Join the discussion
Continue with Facebook
Continue with Google
or sign up with email
Recommended Reading
Read More
Read More
About this Discussion
6 Replies
5 Participants
Last post:
Dychhobbs Apr 18, 2019
Yamaha Starbike Forum
A forum community dedicated to Yamaha Star motorcycle owners and enthusiasts. Come join the discussion about performance, modifications, troubleshooting, maintenance, and more!
Full Forum Listing
Explore Our Forums
V Star New Member Introductions General Bike Talk Stratoliner & Roadliner The Lounge
Popular Communities