Joined Jul 26, 2013
·
6,307 Posts
For our forum Members and friends and family that are in the path of Hurricane Dorian, we pray for your safety and well-being. They are calling this a monster storm with mandatory evacuations all up the eastern seaboard. Please heed the warnings and don’t take any chances, we want you around!

Joined Feb 9, 2018
·
996 Posts
Having lived thru one destructive hurricane and "teased" by many others. You learn many things. Have a prep plan. Have an evacuation plan. Watch the weather. Pay attention to the watermen. Heed warnings. Execute accordingly.
Most importantly, people are more valuable then stuff!

Joined 11 months ago
·
692 Posts
For sure keeping an eye on this monster! I have family with a house in Folly Beach, SC. I have a son on vc with his family in the Outer Banks. Hoping we get a strong cold front out of the northeast that will keep this thing from hitting land. Not that I am in a hurry for colder weather to get here but we could use some cold weather soon to push this thing back out to sea!
► Show Full Signature
09 V Star 950

Joined Feb 9, 2018
·
996 Posts
My bikes are on high ground & so are my cars. Have plenty of beer, liquor, & food. Gas for the chainsaw if needed. Stuff that could blow around is put away or tied down

Good luck we are all thinking of you and all of our eastern friends.
► Show Full Signature
I ain't lost until the tank is empty!

Joined 11 months ago
·
692 Posts
My son and his family got evacuated from the Outer Banks on Tuesday. Continuing their vacation inland in NC. Brother in law is hunkered down at a hotel inland close to Charleston, SC. His house at Folly Beach has been sandbagged so hopefully the Ocean stays in its banks...The river does not flood and his house will be spared.
► Show Full Signature
09 V Star 950

Sent from my iPhone using Tapatalk

Joined Sep 20, 2014
·
359 Posts
It's forecast to be sitting right over Newfoundland by Sunday... should make for an interesting day or two in our neck of the woods! Last bad one that came through here was Igor in 2010.

The three staples...beer, liquor, food. I have a feeling you'll be fine! Stay safe, all!!

Joined 8 months ago
·
1,671 Posts
Can't believe that thing is going all the way to Canada
► Show Full Signature
I ain't lost until the tank is empty!

Deeksvstarclassic said:
Can't believe that thing is going all the way to Canada
Click to expand...

Yeah, might not be too bad here though; they're calling for winds of 110km/h, which isn't that unusual for this area, but they say it could be bad this time, due to the trees still being in full foliage, so a lot of downed trees/powerlines are expected. Normally, we don't get really strong winds here until a little later in the fall, after the trees have dropped their leaves.

The other bad news is that we were unsuccessful in finding someone to build our much-needed shed this summer, to house the bikes. So now I have to quickly think up some plan to keep them from blowing over. I'm half tempted to just lay them down on their side, which has to be better than them falling over. And of course both bikes have brand-new, expensive covers... which will quite likely get ripped to shreds tomorrow!

Scrumdown said:
@camperbc ...
Good luck! May you fare as well as I did.
Click to expand...

Thanks Scrumdown. I just got back in from trying to make a safe spot for the bikes, and here's what I came up with. As you can see, I have the Honda right up tight against the back wall, with the V-Star parked tightly against it, with a garbage bin filled with rocks (~300 lbs) up against the V-Star. (I have the wheels chocked with rocks) The bikes are positioned so that about the only wind that can hit them really hard would be coming directly from the east, (and that's not supposed to be the case tomorrow) so hopefully they will be OK.

The bigger concern when we have hurricanes/tropical storms here on Fogo Island, is that where we are positioned on the northeast coast of Newfoundland is about the worst anywhere for ridiculously strong coastal winds, (our house sits only about 75 ft from edge the North Atlantic) and being a 150+ year-old, two-storey house, we always have to wonder just how much punishment it can tolerate before it disintegrates! The year that Hurricane Igor paid us a visit, our house was actually vibrating/rocking as if we were having a major earthquake! And the upstairs was 10x worse... there's no sleeping up there during a hurricane! We have witnessed our coffee table slowly vibrate its way clear across the living room floor, and have also watched our front deck completely lift clear off the ground. Even after living here for years, through a few hurricanes, several tropical storms, and countless 150+ km/h blizzards, you never do get used to it!

But I suppose I might be worrying for nothing, as our humble old abode has somehow managed to stay intact through winds of 175+ km/h, (last year) and we didn't lose so much as a shingle or a piece of siding, when most of our neighbours' homes had unfortunately suffered heavy damage. (though during our last bad storm, the wind actually stripped the paint right off our eaves!)

I will try to report in again tomorrow, but if you don't hear back from me don't be too alarmed... it likely will just mean that our electricity and/or internet is out. (and there is no cell service here) 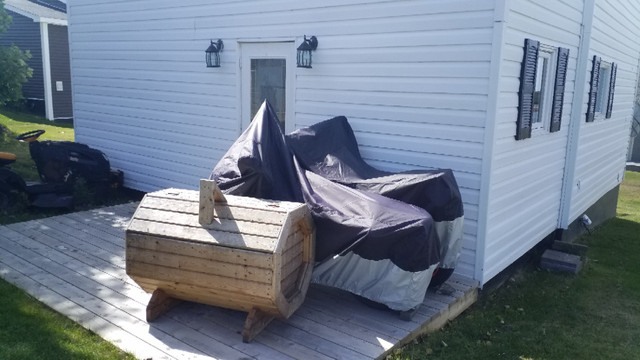 Joined Sep 20, 2014
·
359 Posts
Dorian has now increased back up to a Category 2, just as it's about to hit Newfoundland. Now they're calling for "sustained" winds of 117km/h, and history tells us that right here on the coast we can expect our gusts to be 35-50 km/h above the sustained winds... so in the neighbourhood of 152-167 km/h. (Yikes!) This should get interesting pretty quickly!

Joined Nov 17, 2016
·
2,387 Posts
Good luck to you Glen. It looks like you're as ready as you can be. It passed through here yesterday and last night. I gave in and took the "car" to work (HHR - barely qualifies as a car lol). I didn't want to hit any standing water or get blown sideways on the bike in case it arrived early. But we mostly only got rain and some gusty winds during the day (I work outside) but last night the windows were rattling for a few hours. Seems calm this morning, but it sure cooled things down. Only 6C (42F) right now and still raining a little so I think I better take the car to work again today.
► Show Full Signature
Paul
2007 Vulcan Nomad
V&H exhaust