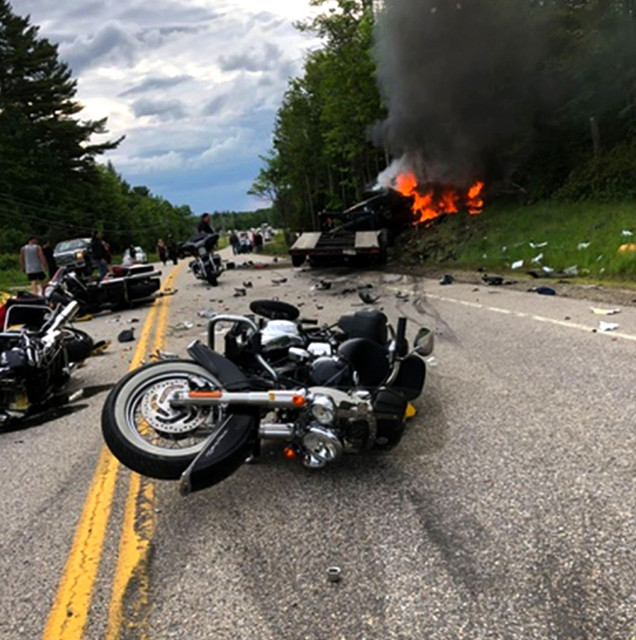 and AP news does not try to load 29 ads on your page, and demand that you turn off your ad blocker so they will all load

there is no word on the cause of the accident, or whether the guys were riding solo, or had their wives with them.
► Show Full Signature
2005 Vstar 650 fully stock bike with quick release windshield, fork deflectors, and trunk in place of passenger seat
2000 Royal Star Boulevard "Ursa" (the She-Bear) fully stock, windshield stays in the garage with saddle bags unless needed
7

Joined 11 mo ago
·
85 Posts
It was a Marine motorcycle group on their way to some get together. Current and former Marines. It looks like all cruisers and touring machines so not a bunch of speed demons.

cant tell if anything was on it

I have see accidents where the load on the trailer shifted back, lifting the rear wheels of the truck or car off the ground

when a rig 80 feet long comes across the centerline you have no where to go
► Show Full Signature
2005 Vstar 650 fully stock bike with quick release windshield, fork deflectors, and trunk in place of passenger seat
2000 Royal Star Boulevard "Ursa" (the She-Bear) fully stock, windshield stays in the garage with saddle bags unless needed

Joined Apr 29, 2018
·
360 Posts
Tragic day for all.
► Show Full Signature
For mad scientists who keep brains in jars, here’s a tip: why not add a slice of lemon to each jar, for freshness?
7

Joined 11 mo ago
·
85 Posts
If a person lives long enough, they'll experience things that are too big to wrap their heads around. 9/11, the Challenger explosion, Kennedy being shot (both of them, for those of us old enough to remember) and so forth.

when we focus on one accident or event, it seems hard to grasp or understand
but even an event like the WTC attack, with 3000 people murdered, is only a bump in the normal levels that happen everyday

the 110 daily traffic accidents for example: if 110 people were dying everyday in commercial jet accidents, then flights would be grounded till we fixed the problem, but somehow we accept that level of destruction when it happens in motor vehicles

and if we took drastic steps to reduce it, for example: requiring that all vehicles have GPS and cruise control, and all vehicles on the highway go exactly the same speed (the speed limit), then people would scream bloody hell.
► Show Full Signature
2005 Vstar 650 fully stock bike with quick release windshield, fork deflectors, and trunk in place of passenger seat
2000 Royal Star Boulevard "Ursa" (the She-Bear) fully stock, windshield stays in the garage with saddle bags unless needed

lesblank said:
Don't know if y'all saw this, it's a shame. Prayers to the families.

How sad that is going to affect a lot of people and families.
► Show Full Signature
I ain't lost until the tank is empty!
K

CONCORD, N.H. (AP) — The driver of a truck in a fiery collision on a rural New Hampshire highway that killed seven motorcyclists was charged Monday with seven counts of negligent homicide.

He was expected to make a court appearance on the charge Monday afternoon in Springfield.

A man who answered the phone at the home of Zhukovskyy's family and would identify himself only as his brother-in-law said Monday that the family is in shock and feeling the same pain as everyone else but couldn't say whether the driver was right or wrong.

Since the accident, the brother-in-law, said Zhukovskyy had remained in his room, hadn't eaten and talked to no one.

Zhukovskyy's pickup truck towing a flatbed trailer collided with a group of 10 motorcycles Friday on a two-lane highway in the northern New Hampshire community of Randolph, investigators said.

The victims were members or supporters of the Marine JarHeads, a New England motorcycle club that includes Marines and their spouses, and ranged in age from 42 to 62.

The circumstances of the wreck have been mysterious.

George Loring, a JarHeads member who lives in Hingham, Massachusetts, and was a few hundred yards from the crash, said Zhukovskyy has "got to live with it for the rest of his life."

"Everyone's suffering so much. I guess it's going to help a little bit, knowing, but I feel sorry for the guy who did it," Loring said. "It's so sad for the brothers and sisters who died. You can be angry at him, you can be whatever. I don't know. I'm glad he's been arrested."

more info and photos of the lost riders:

Joined 11 mo ago
·
85 Posts
I think it would be nice if someone somewhere a lot more artful than myself (who isn't at all) could come up with a nice, high quality, and most of all respectful patch commemorating these seven fellow bikers. I'd wear it.
► Show Full Signature
750 Chris Here in this forum
750 Chris In VRA forum
750 Guy In VROC forum
Chris and Shim In vn750.com forum
Long retired USAF AMMO troop (74 to 95)
Fully retired now :grin:
2005 Yamaha Virago 250
2006 Kawasaki Vulcan 750
1 - 11 of 11 Posts
Join the discussion
Continue with Facebook
Continue with Google
or sign up with email
Recommended Reading
Read More
Read More
About this Discussion
10 Replies
6 Participants
Last post:
750 Chris 8 mo ago
Yamaha Starbike Forum
A forum community dedicated to Yamaha Star motorcycle owners and enthusiasts. Come join the discussion about performance, modifications, troubleshooting, maintenance, and more!
Full Forum Listing
Explore Our Forums
V Star New Member Introductions General Bike Talk Stratoliner & Roadliner The Lounge
Popular Communities