Rode to town for the first time yesterday for a BBQ festival. I filled my saddlebags with brisket and ribs and brought it home for my sick wife and kids.

Had another chore in town, rode...

Looking for any excuse to get back on it today.


Truth be told, bike has 25*** Miles, and I'm not an expert, but I'm afraid I'm hearing tapping toward the end of the ride/evening. Work to be Done. As with all good things...
► Show Full Signature
"I just wanna ride my guitar and play my bike!"

Joined Jan 21, 2014
·
5,073 Posts
Welcome from Houston, Texas. That big grin is a side affect of being on two wheels. These bikes do have some valve tappet noises and normally nothing to worry about. When was the last oil change? What weight? I see you are from the "deep south ". For me in Houston, 20w-50 works best. Here's a few interesting threads to check out when you get a chance.

if you have a windshield on the bike they sound even louder, because the sound is reflected up to your helment

what a new bike should sound like is one of those things everyone goes thru. Its about a 4 hour job to check and adjust the valves the first time you do it yourself, you have to pull the carbs loose (not off completely) to get them out of the way to access the intake valve tap-it covers.

If you are really concerned maybe someone nearby with the same bike can meet up with you, and you can see if your bike is making more noise than his...
► Show Full Signature
2005 Vstar 650 fully stock bike with quick release windshield, fork deflectors, and trunk in place of passenger seat
2000 Royal Star Boulevard "Ursa" (the She-Bear) fully stock, windshield stays in the garage with saddle bags unless needed

Joined Nov 17, 2016
·
2,371 Posts
Welcome from Atlantic Canada. With our short season I find any excuse to take my bike on errands. My wife claims I'm getting quite good at inventing reasons to go somewhere. Hell, I don't always need a reason anyway. And Les is right - that grin is permanent. Get used to it.

As others have said, Yammies are famous for noisy valve trains, and being air cooled there's no water jacket to muffle them. Make sure they're adjusted properly and you'll learn to live with it. Mine is also a little quieter with 20W50 oil.
► Show Full Signature
Paul
2007 Vulcan Nomad
V&H exhaust

Joined Jul 26, 2013
·
6,270 Posts
Welcome to the forum from East Tennessee. Congrats on your new ride and please share some pics with us. Everyone is correct, our yammies are a bit noisy. Ride safely!

Joined 10 months ago
·
59 Posts
Thanks Everyone!


This is from when I got it home.

► Show Full Signature
"I just wanna ride my guitar and play my bike!"


This is from when I got it home.
Click to expand...

I see that big grin. Good looking bike. I'll help you and make the picture bigger. 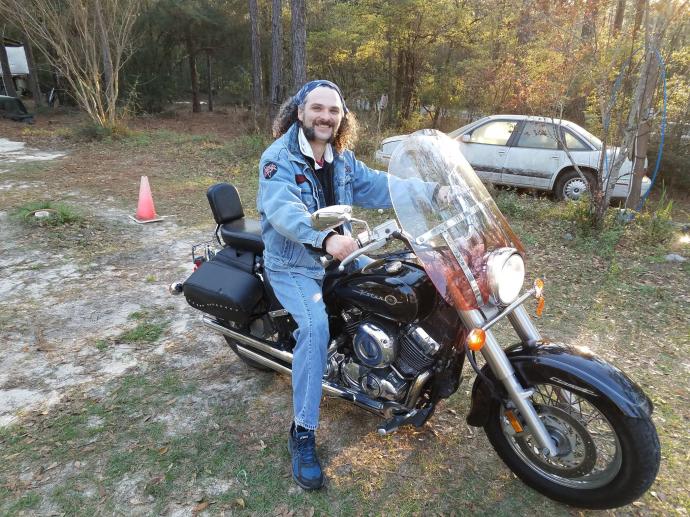 Joined 10 months ago
·
59 Posts
Thanks, yeah, my face hurts from smiling.


My cousin ( a more experienced rider ) and I noticed the day after we had gotten it home, the front cylinder wasn't firing.


So we tore it down and tested the plugs and compression, then got it to fire with starter fluid.

Found on inspection the return spring/clip that goes between the float pin/needle (with the black rubber tip) and the float it's self was missing.

Hollered at my uncle who popped open a random brand-new carb rebuild kit, and passes us a similar part.

We (by we I mean He) fashioned the return spring/clip to fit the purpose; THEN made sure the motion/play was the same in both. (front and back float pins)

As of today I'm around 220 Miles past that. Although I checked the oil which as the seller stated has been changed lately. (Still nearly amber colored- fresh) although I think I'm going to change it again for good measure, and to KNOW what is in it.

Spark plugs are functional, although I already got 2 sets of replacements for the future tune-up. (NKG DP7EA-9)

I'm minutes away from changing my final drive oil with 75w-90.


All that gear seem right by you folks? Any future suggestions?

Thanks in Advance!
► Show Full Signature
"I just wanna ride my guitar and play my bike!"