Well took delivery of my 06 Midnight Strat today. ( see my new members intro. post for the story behind the bike)

The bike came with the stock Yamaha windshield loose, as for one reason or another ( unknown to me) there were

no quick release brackets on the bike. There was a guy on CL selling these brackets-off his 07 Strat and I bought

those today. He attached them to the bike for me. When I got home I tried to put on the windshield, but found that

the bike. So disappointed and also out $100. Why would this not fit if they were both OEM brackets ? or at least I

was told they were off his 07 Strat. Could it be his Strat perhaps had a Memphis Shades shield ( or similar)

Anyway attached some pics of my windshield brackets-not quite sure what purpose these pics will serve !

I did not take pics of the bracket on the bilke-already put the bike in storage. Anyone have any idea's as to the

best next step ? I cannot ride without a shield-don't enjoy it.

Joined Jan 5, 2019
·
20 Posts
I think perhaps the mount he sold me is for a fairing and not the windshield.

Joined Jan 21, 2014
·
5,483 Posts
I did a quick search and yes there are different designs from different manufacturers. I did notice that some had what looked like a hard plastic bushing that fit on the fork tube mounting point, to eliminate metal to metal contact? The picture below is not a good one but do you see the bushings? I've had windshields in the past but none were quick connect. Hopefully someone else will chime in shortly. 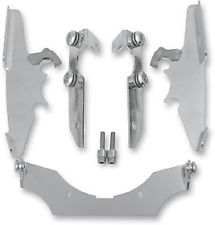 Joined Jul 10, 2010
·
91 Posts
What is pictured above looks like Memphis Shades type, like what is currently mounting my Memphis Shades bat-wing faring to my bike.

Saffer, what you have on the windshield is correct for factory installation.
What you need is the factory mounts as in this LINK.
If you look at the pins (spools) the smaller one would go to the bottom and your mounts would drop in.